Interactive marketing spend on the rise

Forrester Research predicts major growth in interactive marketing spend. As the graph below shows, spend is projected to increase from $23 billion this year to over $55 billion by 2014. Wow, I guess the recession is over. 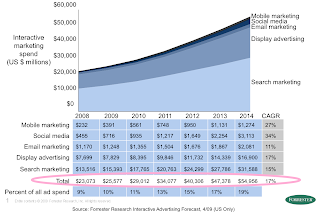 What is number one you ask? It is television of course coming in at 60% of all ad spend.

Procter & Gamble is the number one advertiser for 2008. They account for $2.8 billion of all ad spend.

Perry
Posted by Perry D. Drake at 2:52 PM No comments: