Learn from the NYC Marathon's PR Disaster--Develop your Social Media Strategy before its too late!


We all know at some level that social media has had a trans formative influence in our world.  What we may not have experienced, is the power of that influence against one of our own interests.

We have marveled at the power of social media to highlight and move forward trivial cultural issues, such as a funny video or picture, and on a more serious note, social media has been credited with triggering the Arab Spring and consequently toppling governments.

Other organizations can learn a lesson from what has played out this week for the City of New York, The New York City Marathon and it's sponsor, the New York Road Runner's organization.  That lesson is: Build your social media strategy before you need it! 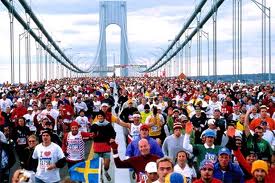 The power of social media was unleashed against the City of New York, the New York Road Runners organization, and would be marathoners.  Following the epic storm (Hurricane Sandy) that hit New York on Monday, October 29, the Mayor of New York, Michael Bloomberg together with the NYRR CEO Mary Wittenberg announced boldly on Wednesday, October 31 that the premiere running event for New York, the New York City Marathon, would continue as planned; only to announce Friday evening November 2, that the event would ultimately be cancelled.

While the initial decision (moving ahead) was surprising, both Bloomberg and Wittenberg defended the decision for myriad reasons.  Among the reasons to move forward were that the Race would focus attention on the city, and thus relief efforts would result.  More directly, Wittenberg would donate $1 million for relief and recovery efforts.

As the week wore on however, the mainstream media and social media weighed in about the timing of the NYC Marathon relative to the hurricane and the concern that resources (police, fire fighters, water  and generators) would be diverted from those in need and to the running event.  Particular mention was made of the bridge closures at a time when some of the tunnels were still flooded, making navigation on and off Manhattan more difficult.  A congressman from Staten Island, Michael Grimm appeared on the evening news on Thursday, November 1 making an impassioned plea to call off the Marathon as Staten Island was making grim discoveries in the wake of the hurricane.  Meanwhile airports had reopened, and international runners were arriving in New York, some evidently vying with New Yorkers made homeless by the hurricane for hotel rooms.  All of these stories (and more) played out in mainstream media and were amplified in Social Media.  Finally, 36 hours before the marathon was to kick off, an announcement of cancellation of the event came from the Mayor's office, and the NYRR was silent, for at least three quarters of an hour.

Certain threads of the story took on a life of their own in social media. A few of the threads which had no basis in truth but were nonetheless played out in social media were:


Some of the comments that were made in Social Media were not only not intended to be helpful at all but just be rude and directed at runners:
In the compressed time period between the announcement that the Race was on as of Wednesday morning, until the time that it was announced as cancelled on Friday evening, one fact was painfully obvious to me.  The voice of the runners was missing, I would have thought that the NYRR would have the wherewithal to launch an effort to be the voice of the runners.  I am sure that they have never been in such a role before, but it was rather eye opening that their viewpoint was completely absent in the dialogue.

In the final analysis, it is certain that even if the NYRR had engaged with the critics in social media dialogue the result would have been the same -- the event would have been cancelled. But had the NYRR been a more active participant in social media, perhaps the NYRR could have maintained some level of good will among their core constituency, the runners.  Or alternatively, had the NYRR been a skilled user of social media, perhaps they would have made an announcement to cancel the race at the outset.  For example, the graph below created using Lithium (a social monitoring tool) clearly shows an explosion in conversation involving the words "NYC Marathon" and "cancel" in the social space (twitter, Facebook, blogs, news feeds, etc.)   In addition, we note that the sentiment regarding these conversations is more heavily skewed negative (red) versus positive (green).

From the NYRR Facebook page we can see only 16 posts were made between October 25th and November 2nd.  However the 16 posts by the NYRR generated nearly 4,000 comments from other Facebook users.

What could NYRR have done differently to better manage the dialogue?

More monitoring of the social media, and in a proactive manner.  It seems that they were either not monitoring the social media or if they were they were not responding in a manner to diffuse the criticisms and misconceptions.  Is it possible they did not fathom that the decision would be controversial?  They could have tested the public sentiment by asking questions on their Facebook page as an attempt to gauge public sentiment.

Regarding the timeliness of the social media communication, often announcements were made in other media first, leaving the social channel as a place where core constituents, learned the news second hand after it was tweeted out or communicated by others.

Provide a platform for the runners to communicate to each other. The NYRR was not a heavy user of social media before this Marathon, but perhaps that will change after this experience.  Had the NYRR promoted a special hashtag to marathon entrants, then perhaps as the social media lit up against the Marathon, the runners could have found their own collective voice.  It is unfair to characterize all runners as selfish, insensitive, etc. and having a voice and feeling part of a community against all of the critics would have helped to minimize the damage to the relationship NYRR has with their constituency of runners.

Had the runners been provided a platform for communication they may have come together and made the suggestion to cancel the event to the NYRR, thus making the runners part of the process instead of hapless pawns in the decision.

NYRR needs to provide more information about their efforts to help the community forward going and cleanup and recovery efforts right now.  As noted based on their Facebook page there was granted not a lot of time to socialize the vision for helping with the recovery efforts, however, the organization runs races (shorter in distance) all throughout the year, and the NYRR is involved in supporting many charities in the city.  I would venture to say that most critics of the Marathon do not know that the NYRR raises money for prostrate cancer screenings, lung cancer research, victims of domestic violence, and food programs for people with AIDS to name a but a few of the worthwhile causes.  In addition the NYRR is an organization dedicated to fitness promoting running to children and having mentoring programs where adult runners teach children and teens running techniques.

Had NYRR's good works been better promoted throughout the year, it would have been much more difficult to cast them in some kind of a villian's role.  Then the most they would seem guilty of would be being overly optimistic on how quickly the city would be ready to have the race.

What are your thoughts about the social media strategy (or lack thereof) surrounding the NYC Marathon?  I would like to hear from you.


As this is the last report before the election, let's keep in perspective social media strategy is but one of the many tactics available to the candidates.  It will probably take several election cycles to understand how much influence social media has on the electorate relative to endorsements, TV ads and the candidates positions on key issues.  The election of 2012, however is our first data point in what promises to be a new kind of campaigning where citizens can weigh in with their opinions immediately via social media.

We will soon know who's tactics were more effective.  Remember to exercise your right to vote!

This week events surrounding Hurricane Sandy, which hit the east coast on Monday, October 29, impacted the content of the conversations as can be seen below.

Posted by Rhonda Knehans Drake at 5:32 AM No comments: