The next update of our Obama Romney 2012 Social Media Dashboard is complete.  Highlights through 9/23/12 include the following observations:

Please feel free to comment, and of course check back next week!

Rhonda and Perry
Posted by Rhonda Knehans Drake at 7:35 AM No comments:

The next update of our Obama Romney 2012 Social Media Dashboard is complete.  Highlights through 9/16/12 include the following observations:

Are you measuring your social ROI?  You know what I say 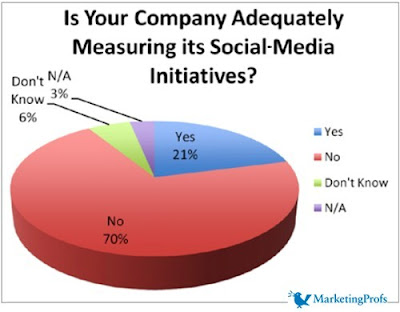 You have to start somewhere.  You have to start sometime.  So it might as well be now.  To be honest, it is really not that difficult to put some numbers against your social marketing efforts.  Trust me.  And, it becomes a fun exercise in doing what I call "What if" analyses.

I have been doing ROI calculations for a long long time. And I thought, why aren't more marketers trying a bit harder to determine the ROI of their social marketing efforts.

When I went to the Social Media Benchmark Conference on May 9th in NYC this year I expected to hear all about Social ROI and how various companies are doing it.  To my surprise very few numbers were revealed.  I thought wow.  How can this be?  See my post titled Beer, Sex and Social Media regarding this conference for more details.

Another conference is coming up titled Social Media ROI sponsored by Business Insider in NYC on September 27th.  I plan on attending this one as well.  And, I am curious to see if I will get some real numbers this time.  I will find out soon and report back of course.  But in the mean time lets you and I discuss social ROI and how we can do it.

Of course let me be very upfront, clear and honest...an ROI for your social campaign is not going to be perfect.  By no means.  There will be a lot of assumptions you will have to make.  But with a little thought, and the use of preexisting research, some real meaning can result out of your efforts.  It is actually kind of fun.  A challenge.  I love challenges!

So let me take you through the thought process and the steps to conduct a social ROI analysis.

First of all there is a ton of great research out there that we can use to help us do our ROI analyses.  I consolidated some of the best studies from ComScore, Forrester and others available today to help us.  They are summarized below. These will become inputs into our calculations later.


Facts from "The Value of a Facebook Fan" by Syncapse, June 2010

The ROI Calculation
Below is an example ROI analysis I conducted for a client not that long ago.  To protect the client and my work for them, I have removed reference to their name and some of the calculations.

The main goal of the analysis was to help them understand the benefits of obtaining 100,000 fans and if those benefits would offset the costs.  The screenshot of the Excel spreadsheet I created to conduct this analysis is below and requires the following data:
Putting it all together in a spreadsheet was the next step.  Calculations were done to determine: 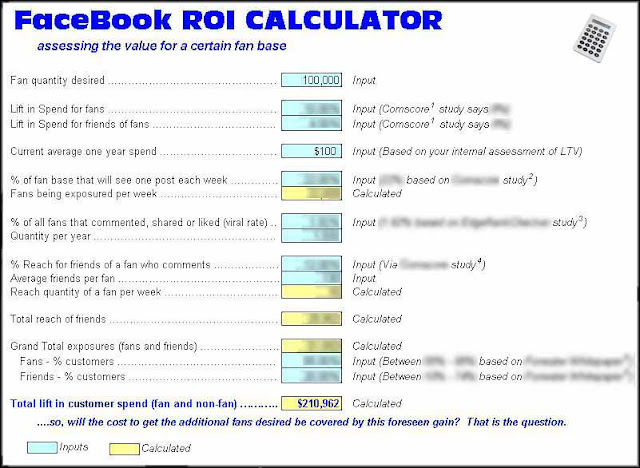 Using the facts from the various studies cited above and assumptions obtained from the client I input the data into my spreadsheet and determined the increased value to the brand by obtaining 100,000 fans would be approximately $211,000.  And, this is just based on a one year value.  So the question posed to the client was:

Give it a try.  You might as well start now.  It will never be perfect. Never.  So no need waiting.

If you need help and guidance in assessing the success of your various social campaigns (or any campaign), please do not hesitate to reach out to me.  This is my specialty.  Note I do have some ROI calculators available for FREE and are located on my web site dedicated to marketing test design and analysis at www.confidenttest.com.  Check them out.

I hope you enjoyed the post and that it gave you some great ideas as to just what can be done here.

Perry
PS  the studies cited in this post are listed below.

It is official.  We have updated the 2012 Election Dashboard Infographic.  It is for the week ending 9/9/12 and includes all social discussions shaped by the Democratic National Convention last week.

Our first dashboard presented one week ago (http://www.drakedirect.blogspot.com/2012/09/election-2012-social-media-barometer.html)  was released right after the Republican National Convention.  In that release, Romney had almost 50% of the share of voice and more favorable sentiment vs Obama. In the release of the new dashboard, shown below, we see just the opposite.  Highlights include: 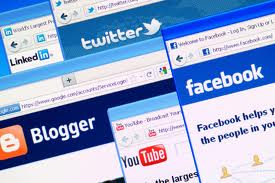 As the 2012 election season ramps up, we find ourselves viewing various polling data which purportedly convey who is dominating the race.  Rarely do the news outlets report on all the social data available to help interpret other underpinnings of the race dynamics regarding the public perception.  In other words, the narrative on the discussion of the campaign is largely devoid of social media metrics.

We, at Drake Direct, have constructed what we think is the first Social Media Infographic Dashboard for the Obama - Romney 2012 Election as shown below.

The following are thought to be the most important metrics for the upcoming election, from a social monitoring perspective:

There are many tools available for monitoring social data and conversation.  Some are free; some are licensed.  We used a combination of both to construct the above dashboard and included:

While there is little historical data on the relative strength of social media's impact or predictive power to guide us, we can still follow each candidate's campaign execution to see how his actions fuel our emotions and conversations.  Social media can enhance or detract from our perceptions of the one seeking office. Drake Direct does not endorse either candidate.

We will update this dashboard weekly, right up to the election.  So, subscribe to our feed to make sure you don't miss an update.

Hope you enjoy our Election 2012 infographic dashboard.  To download this week's infographic, just right click on the image and save.

Note:  Before embarking on any social monitoring campaign, make sure you understand the tools, the metrics, and the issues surrounding them.  Many of the metrics in the social space are prone to error, such as sentiment.  In particular, looking at sentiment on its own and not, for example, comparing current to prior week or your competitor's figures can be misleading. These metrics must be indexed.  You just have to be careful.  We will have more to say on this in a future blog post.
Posted by Perry D. Drake at 10:44 AM 2 comments: