Dancing with the Stars, Season 2012: The Dance-Off, Google vs Facebook

As a follow up to my November 2009 post titled Facebook Nearing the Finish Line I was anxious to see how Facebook traffic patterns now compare to that of Google and if they have surpassed Google in terms of users. Let's take a look. 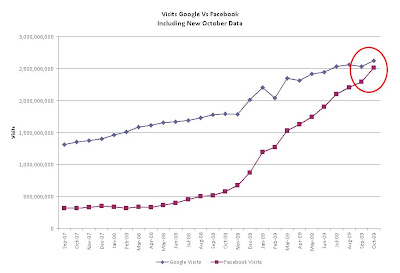 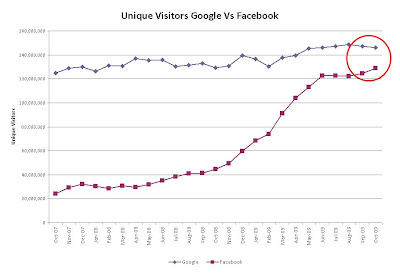 In both cases we could see Facebook making great gains on Google during those recessionary times.

Additionally, as you may recall, in another blog entry titled Has Facebook Been Lucky I predicted that Facebook would surpass Google before the end of 2009 in terms of Visits. So the big question is...did they?

On Christmas Eve and Christmas Day 2009, Facebook surpassed Google in terms of visits for the very first time according to Hitwise (Facebook Surpasses Google As Number One US Site)

Then Facebook's line actually crossed Google's for the first time in May 2010. Facebook held the trophy until roughly April 2011, then the dance-off began, as clearly seen in the updated chart shown below in Figure 3. 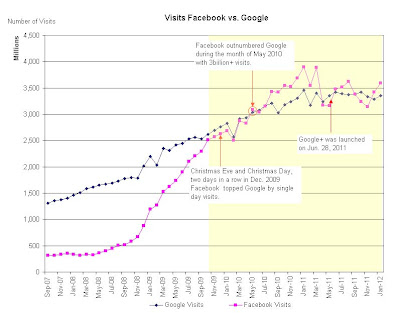 Figure 3
Regarding unique visitors (or if I may call them users), Facebook is not quite there yet. But as more and more of the total internet population establishes those Facebook accounts, that day will happen. And it is nearing quickly as the updated chart below shows in Figure 4. 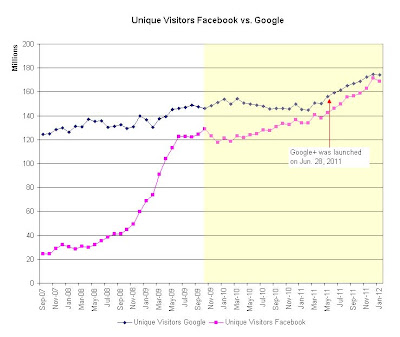 Figure 4
As can been seen Facebook almost touched Google in December 2011. In total Facebook's uniqiue visitor count has roughly increased 30% since October 2009 according to Nielsen (Facebook Gains on Google) and our research.

So now we can appreciate why Google tried to create Google+.

Google realizes and can clearly see we as individuals are changing the way we gather information prior making decisions of any kind including purchases. Google is no longer the only option. We view crowd sourced options pretty highly. Especially from our circle of friends. And that is what Facebook allows us to do in addition to allowing us to stay in touch with our friends and loved ones by sharing experiences, stories, photos, videos, etc.

Does this spell trouble for Google? I doubt it. But, keep in mind, Facebook is pushing into search...

To read more on this take a look at Facebook Delves Deeper Into Search published by Bloomberg Businessweek, March 29, 2012. To date search had not been a priority for Facebook but things are changing. 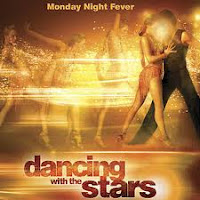 So, stay tuned for the next installment of Dancing with the Stars! It should be an exciting showdown.

Perry
Special thanks once again to my research analyst Yuko Ichihara for her valuable research work and insights provided.
Posted by Perry D. Drake at 9:30 AM No comments: